It all starts a few thousand years back, when one person punches another. They hit a tooth or a forehead and it hurt them almost as much as the person they punched. So man did what he always did. Thought about it. Found a way to solve that problem with technology. That bit of ancient ingenuity is still on display every Saturday night in your combat sport of choice. That ancient man, took a 12 foot strip of ox hide, and made the first hand wraps for boxing.

Fighters of the ancient Olympics sparred bare knuckle. For much of the early Olympics, those hand wraps were the only thing a boxer would wear into a fight. The wraps evolved over the centuries. The Greek world was expanded by Alexander, before being conquered by Rome. As the scope of the ancient games grew, the wraps grew ever more elaborate and brutal.

Over the centuries the simple hide strips, turned into hardened leather construction. Gloves with bits of metal sewn in to increase the damage of the strikes. Not to mention the gladiatorial culmination of the boxing glove. A rather, unsporting, weapon called the Cestus. This was purely for gladiators as there was not real expectation that somebody getting hit with such a weapon would survive it. 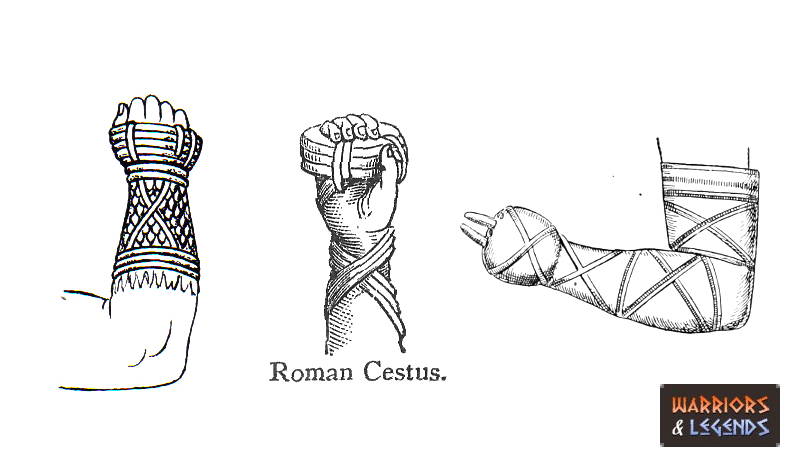 This is essentially the same gloves the Olympians were boxing in, just with out the, uh, stabby bits. We know this thanks to one of the most striking statues in ancient antiquity. The “Boxer at Rest” is a must see piece of art for any fan of combat sports. It depicts an Olympic Champion after his victory. He’s cut and bleeding, with cauliflower ear and the detail on the gloves is just as immaculate. 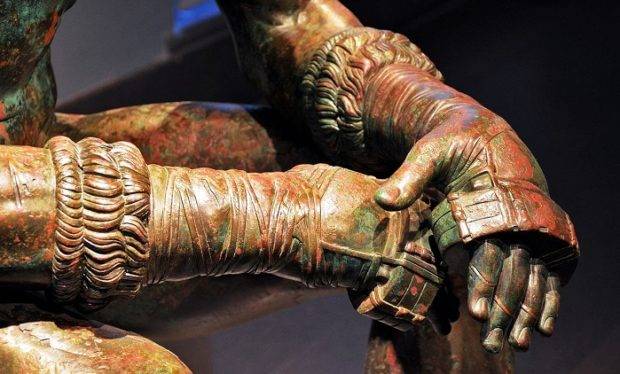 The statue was cast around 320 BC. The fur high up on the wrist allowed the Greek boxer to wipe sweat or blood from his face. The thumb was completely unwrapped, and the finger tips were completely open. This allowed the fighter to make a proper fist. The ring of hardened leather gave them something to grip. Not to mention it adds a bit of sting to a punch and protection for the knuckle. The wrists are wrapped in the leather chord that serve the same function as modern hand wraps.

By the fall of the Roman Empire boxing had made a powerful enemy. The Catholic Church regarded the sport as a pagan activity. In 392 AD, the church bans the Olympics for the festival’s implicit ties with the Greek pantheon. Boxing disappears from the historical record for centuries.

Boxing gloves return to the public eye in the 1740’s London. Jolly old England had a thriving bareknuckle boxing scene. While it was always considered a lower class sport, the young nobles of England had come to love it. Not just as an expression of competition, but also as a means of self-defense. Fights down the pub are just as much an English tradition as tea time and the Monarchy.
One man came to represent the entire sport in the mind of the British public. That man was Jack Broughton. Not only was he arguably the first Heavyweight champion in the history of boxing, he also finalized the rules that governed the sport. Long before the Marquess of Queensbury, boxers fought under Broughton’s rules. Jack ran an amphitheater and boxing school as well.
With a school full of young noblemen not looking to mark up their faces, Jack had got an idea. He took the concept of the cestus and completely disarmed it’s design. Jack called these new gloves “Mufflers”. 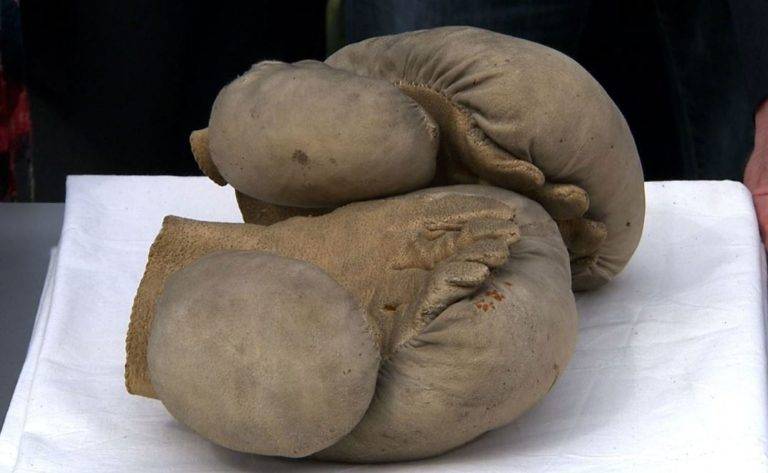 These were only warn during sparring and training. All the fights of this era took place bare knuckle. But as a piece of marketing, these gloves made Broughton’s the only place to train as a young nobleman about town. Training in gloves became more and more common as the years pass.

It took over a century for those mufflers to become standard equipment for two fighters engaged in a boxing match. It took one man to make that change. John L Sullivan was the son of Irish immigrants. He was born in Roxbury Massachusetts and in his prime his portrait was hung in almost every bar in America. He was known in his day as the “Emperor of Masculinity”.

John L. unified the gloved and bare knuckle championship when on July 8, 1889 John took on Jake Kilrain. This was the last Heavyweight championship match that was fought without gloves of any kind. It was a grueling, day-long affair that saw Sullivan vomit after the 44th round. John managed to get his 2nd wind and turn the tables on Kilrain. Kilrain’s corner threw in the towel after the 75th round. He did it wearing a pair of these: 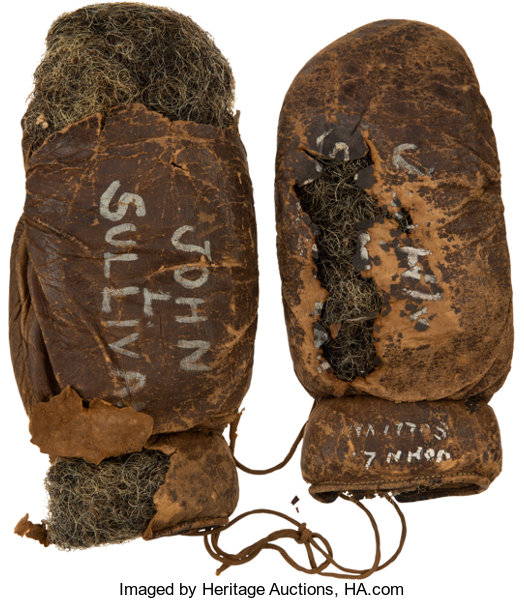 These gloves are essentially identical to the mufflers Broughton had created. Just leather stuffed with horsehair and sewn shut. The biggest difference being that the “Mufflers” Broughton made were worn like mittens while the gloves John L. wore were proper lace ups. Since John L was the champion, he mandated that any future defense of his championship, would be fought wearing gloves. Just like that, gloves became non-negotiable in boxing. When John L lost his title to James J Corbett, Corbett stuck to Sullivan’s stipulation of only taking title defenses with gloves on. 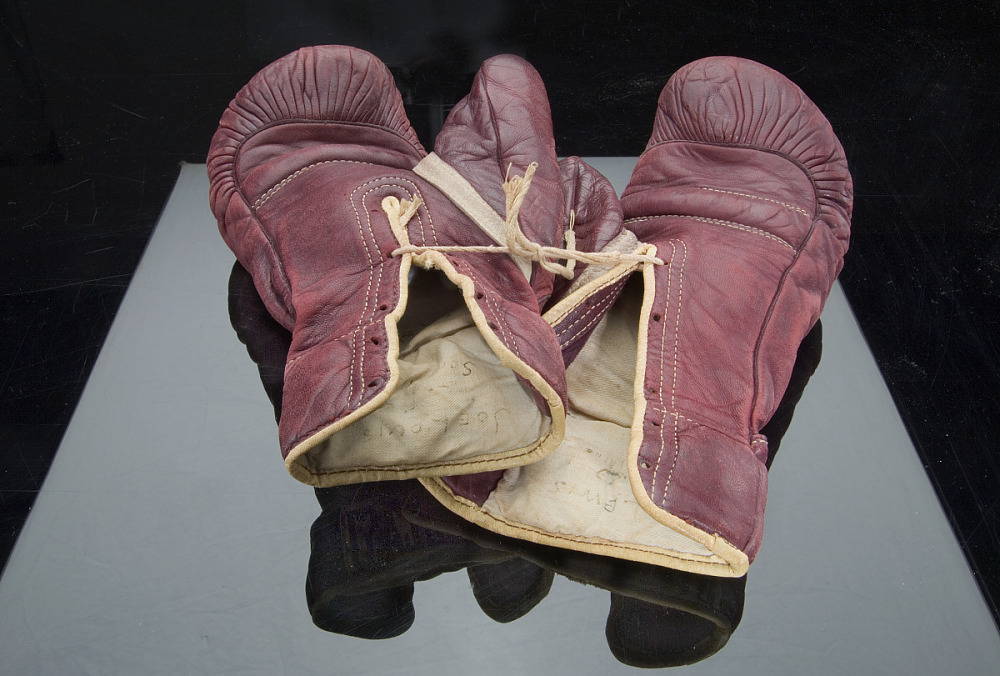 By the 1930’s the design for boxing gloves is essentially standardized. These Joe Louis worn fight gloves were used in his first bout with Max Schmeling. If you found then at the bottom of a bin at the gym you might not even look twice. That is how timeless the design of boxing gloves has become. Though sharp eyes notice one big difference between then and now.

Fight gloves today have the thumb tacked into place. This seems to have taken place sometime during the career of Muhammad Ali. His fight gloves from the Liston fight in 1964 have the untacked thumb. 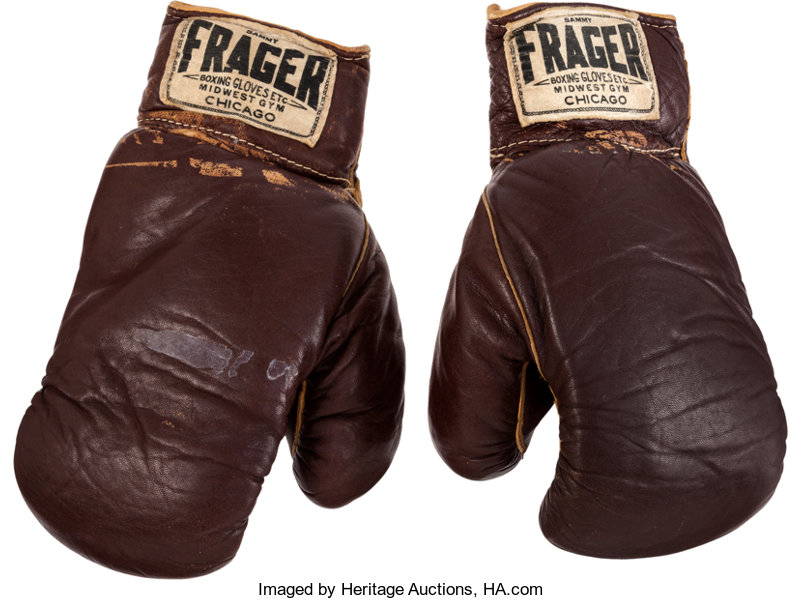 But by the end of his career, the gloves he used in the Larry Holmes fight had the thumb tacked into place. While I can’t seem to find a specific date on the rule change, fair to say it came at some point during the late 1970’s. Since then all the big changes to boxing gloves have gone internal. They gained a few ounces over the years, but the recent revolution in boxing gloves is all in the padding.
Even in Ali’s time, gloves were still padded with the same horsehair Jack Broughton had used. It’s only recently with the invention of high density foam that horse hair has started to fall out of favor. The foam doesn’t settle or loosen like the classic horsehair gloves. With the foam there is always the same exact amount of padding between your knuckles and their face.

Technology and design has made many improvements to the boxing glove in recent years. Advancements in padding, various materials for the external shell and different sizes & weights for fighters of all shapes and sizes. At Combat Corner, we've honored the deep roots of the boxing glove history, while taking advantage of the incredible technology at our disposal.

Combat Corner offers the best boxing gloves for your money. Check out some of our popular options below: